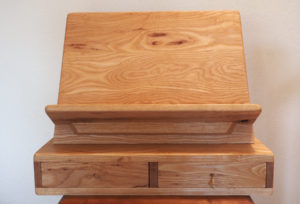 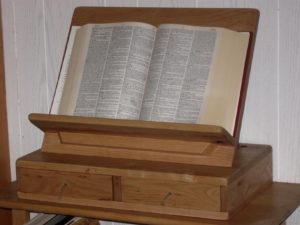 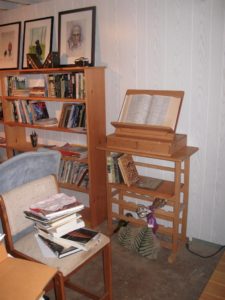 This dictionary stand was commissioned by a friend for his cabin on a beautiful property in the mountains of northeastern Pennsylvania. He wanted this piece to reflect its surrounding, so asked that it be made of a variety of wood native to the property. He also requested that the dictionary stand have something of a rustic look. Given a list of the trees on this property, I originally started looking at my local hardwood supplier for white oak lumber to use, but then I saw these pieces of eastern ash. Knowing that his variety of wood was also on his list, I immediately decided that the grain and the coloring would be perfect (my friend had also specified that “knots are O.K!”).

Using hemp cord for the drawer pulls was also my friend’s idea. I don’t think I had ever seen an example of this kind of pull, but I knew it would work, could  be easily done, and would contribute to the “rustic” look and feel of the dictionary stand.

I had visited the cabin that would be the home for this dictionary stand a number of times, but it had been a while, and I didn’t know what room it would be going into. Fortunately, my friend knew what he wanted, and the specifications and information that he provided were just what was needed to create a piece that not only perfectly accommodates the dictionary it’s made for, but fits nicely into its surrounding.

When I first received the order for this piece, I thought that a new dictionary stand in this digital age would be something of an anachronism. I don’t think I’ve used a paper dictionary in years, and I use dictionaries a lot (when I’m not making fine furniture, I”m translating Russian literature to English). But there is something comforting in the persistence of tangible books, especially reference books. I’m very thankful to have gotten this assignment, and took great pleasure in making this dictionary stand.